Posted at 12:48h in Divrey Torah, Events by Rabbi David

When Tanya and I lived in Brooklyn, the small corner store at the base of our building had a sign, “Best pizza in town!”  Considering how many places in New York sell pizza, I was impressed to be living right above such a culinary landmark.  Alas, however, it was just another typical New York deli with mediocre pizza.

What is the line between self promotion and deception?

In the Torah, we read of twins, Jacob and Esau.  Jacob’s tricks are well known.  The midrash, however, says that Esau tricked his dad.  The texts reads “Isaac loved Esau because [his] game was in his mouth” (Gen 25:28)  The word for “game” is also trap; the midrash reads this that Esau laid a trap with his mouth–he deceive his father with his mouth. He would ask him: “Dad, how does one tithe salt? Dad, how much does one tithe straw?”

Esau knew the Biblical rules that straw and salt are not tithed; he was not concerned about tithing (according to the midrash, he was completely lawless).  He was only trying to create a false impression of religious diligence.  And Isaac was fooled; he would say to people: “Look at my son, how diligent he is in the fulfillment of the commandments!”
The term for tricking someone is geneivat da’at—literally “stealing thoughts.”  You have a right to know the truth. If I do something to get you to think something else, something untrue, I am stealing that right from you.  On the surface, there was nothing dishonest about Esau’s question—it’s similar to a push poll, where a fake pollster creates a false impression just by asking a question.  But the Talmud says we are not allowed to create false impressions.  We can’t say “I am opening this bottle of wine in your honor,” when we were opening it anyway.

The midrash says that truth is God’s seal.  Living a sanctified life means being truthful about who we are, admitting our weaknesses, and not promoting ourselves in ways that are untrue.  We are challenged, even in a society that values self-promotion, to live lives of honesty, humility, and integrity. 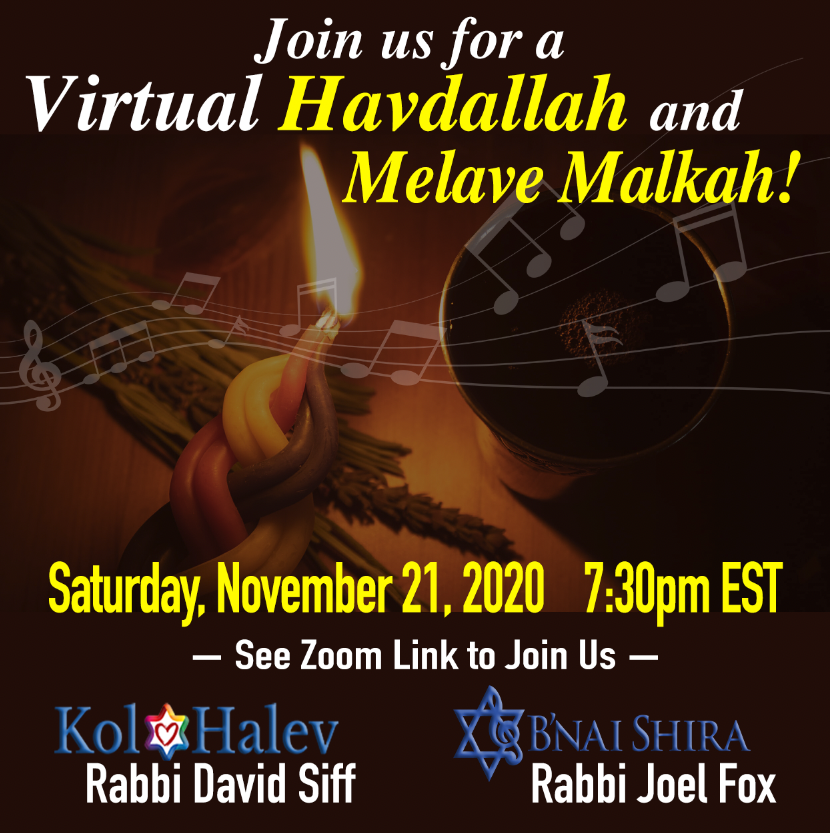 Virtual Havdallah and Melave Malka
Join program with B’nai Shira & Rabbi Joel Fix
Saturday, 11/21, at 7:30 on Zoom
Connect to joy and gratitude with music and stories and teachings.

Let’s get together, for real!

Join us for Shabbat outdoors on the lawn, with music & Torah discussion.
Social distancing observed.

Children’s service led by Tanya will include music, stories, and edible art.

At Kol HaLev’s Hebrew School, our goal is to develop both creative arts based offerings, as well as more text based offerings, similar to day school content but with less Hebrew.  Our first creative arts class is Torah through Drama, which explores Torah personalities and values through dramatic play.  We are planning to offer mitzvah missions, music, ulpan, prayer through movement, and more.  This year we are also offering text based classes such as Mitzvah class and “Torah and Today.” We also offer Hebrew (I’ll tell you about that later.)  We don’t just offer Hebrew School; we offer a wonderful menu of Jewish education for bright, creative, fun kids who want to love being Jewish.

Please consider supporting us through our facebook donation button, or by becoming a Builder; every little bit helps.  Together we can build a vibrant Jewish future in Palm Beach County.